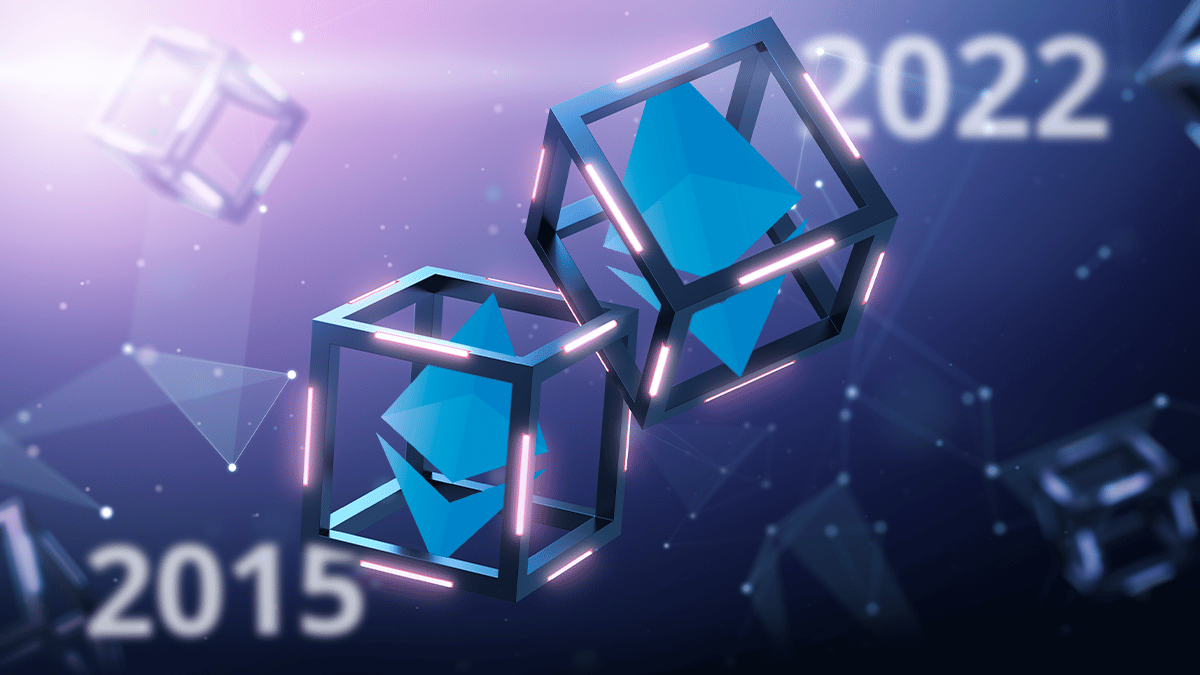 Today, July 30, 2022, the day that marks the seventh anniversary of its launch, Ethereum is completely different from what it was originally. The network has gone through several modifications and has changed enough that it is no longer what it was today when it launched in 2015.

Its development began in 2013 with the basic idea of ​​Vitalik Buterin, who published the Ethereum white paper.

By that time, Buterin had been involved in the development and popularization of Bitcoin technology. However, his idea of ​​launching the language Scripting (And it is much easier to program) Bitcoin is not accepted.

This led him to create his own cryptocurrency idea.Decentralized applications (dApps) can be developed through smart contracts. Solidity programming language is the dominant language on Ethereum.

for the year 2014, Its development was launched along with the initial sale of Ether (ETH)., which will be the native currency of Ethereum, in order to fund the project. 2000 ETH was exchanged for 1 bitcoin (BTC), whose price was around 400 USD.

The various changes and improvements recorded by Ethereum are recorded in EIPs (Ethereum Improvement Proposals). Next, let’s explore some of the big changes from the first Ethereum to now.

Barely a year after its launch, the first dApps to make their way into the Ethereum ecosystem. Decentralized Autonomous Organizations (DAOs) have been on the rise. These platforms base their decision making on community votes through governance codes..

Of all these platforms, DAO was one of the most productive. Crowned, at that time, as crowdfunding With the largest fundraising in history, it raised over $100 million (just over 10 million ETH to list at the time).

However, it was hacked. The equivalent of $60 million in ETH was stolen from the smart contract that stored the funds.

Buterin himself intervened, As this hack could damage the image of the still young Ethereum network. Buterin’s proposal was based on the formation of the network. That is, the network will be reversed to a previous point where the funds were transferred, thus preventing the attacker from holding ETH.

The proposal was approved and eventually the network was forked. It should be noted that this decision was quite controversial, as it showed that the network was not stable, And that under the influence of Buterin it can arbitrarily change course.

This discontent was reflected in the fact that once the network was forked, the original network was maintained by a large number of miners and the people running the nodes. It is currently known as Ethereum Classic (ETC).

by fork The attacker moved from owning ETH to ETC in his wallet, because according to the new chain rules, such a transfer has never occurred. The network was eventually forked with an EIP-779 hard fork, known as the DAO Fork.

From this perspective, it can be said that the Ethereum launched in 2015 is not the same as the one that exists today, as its blockchain has been altered.

At the end of 2015, months after the launch of Ethereum, the first known token standard called ERC-20 was proposed. This will be the most common standard for token generation. Under this format, more than 560 thousand different tokens have been created, according to data from Etherscan. The most popular are Tether (USDT), USD Coin (USDC), and BNB.

ERC stands for Ethereum Request for Comments. However, the real abbreviation would be EIP. ERC-20 is equivalent to EIP-20, But the community decided to name the token standards in the ERC format.

ERC-20 is a standard that serves both security token generation (for example, USDT), and governance. The latter, although listed on the market, has its main function of giving the right to vote to the owners of some decentralized applications.

As the ecosystem grew, new token standards were created, such as ERC-721. Unlike ERC-20, The peculiarity of these is that they Non-fungible tokens (NFTs). No one is equal to another.

NFTs have become popular in various fields such as art, and even within video games, reaching millions of players under the concept of play-for-profit (play to win or P2E) games.

The difference between ERC-20 and ERC-721 was ERC-1155, which allows transactions to be aggregated Reducing costs at the time of dispatch, while maintaining the characteristics of each one.

Currently, Ethereum has two types of operational block chains. Although in practice, only one works (registering Ethereum accounts). The other, known as the Beacon Chain (Beacon Chain) It will be part of Ethereum 2.0a development of the network that will leave cryptocurrency mining for Proof of Work (PoW) giving way to betting and Proof of Stake (PoS).

Configuration block for beacon chain Already active, it was Verified December 1, 2020. Since then, the said network has been operational, although the first transaction has not yet been recorded.

The launch of the network allowed Ethereum 2.0 auditors to be registered. These will replace the role of existing miners and will be responsible for validating transactions. Since beacon chain activation, checkers Empty blocks that are waiting are validated fusion also “merging”the stage that will give relay from one network to another.

By the nature of the protocol, ETH is inflationary. There is no limit to the issuance of coins. It differs in that from Bitcoin (BTC) whose amount is limited to 21 million BTC and there will be no other one.

however, This growth in ETH will have its limitations, which is that the developers have implemented a function in the Ethereum code that burns ETH.. This is EIP-1559 that was activated in August 2021. Over time, as these burns increase, ETH will be a deflationary asset: more will be burned than was issued.

The function of the EIP-1559 is to participate in the ETH which is given as a commission to pay the transactions to the miners and destroy them.

At the time of this post, around 121 million ETH were in circulation. According to Watch The Burn, more than 2.5 million ETH have been burned since the launch of EIP-1559. The more transactions are made on the network, the more ETH will be burned.

Data collected by CriptoNoticias shows how the annual ETH issuance has been around 4% annually. However, after the implementation of EIP-1559, said inflation fell, sometimes below 1%. To be considered a deflationary asset, the issue value must be negative.

The price of ETH has been one of the biggest changes the ethereum ecosystem has seen since its launch. The initial sale price for launching Ethereum was 2000 ETH = 1 BTC in 2015. With BTC trading above 400 USD, Each ETH had an initial value of 0.2 USD.

Bitstamp was one of the first exchanges to list ETH, which tracks the launch price above $2.7, which after days will fall below $0.5, as shown in the chart above.